Stress Of Having Acne Scarred Skin

People that suffer from acne scars have a great deal to contend with. The discomfort and stigma associated with acne scarring can be traumatic enough. However, another issue that poses a big problem is the risk of scarring. Acne can leave permanent scars on the skin, and this can cause a great deal of stress for sufferers, particularly if the scarring is in a prominent place, such as the face.

As tough as it is when you’re going through it, acne may even leave you marked for life. It can make marks on the face or body that can be difficult or near impossible to erase.

Sometimes, among fairer-skinned people, acne will leave flat or brown spots that don’t rise off the surface of the skin and don’t go deeply below the skin. Post-inflammatory hyperpigmentation is probably the culprit and these marks are not really true scars. These “blemishes” have no long-term effect on the skin’s collagen structure. Eventually, usually within months, these spots will fade, to the point that they will become virtually invisible. Any skin-lightening product, or a medication like Retin A, can speed up this process.

People with darker complexions tend to show the opposite response to the damage caused by acne. The skin may lighten up excessively, in a condition called post-inflammatory hypopigmentation. When acne blemishes become inflamed, and if the sufferer picks or scratches the skin, the pigment cells in the epidermis, one of the uppermost layers of the skin, will be temporarily “banished” from the surface. Such damage will leave white marks that tend to stand out against the normal brown background color of the skin. Gentle skin care and avoiding even mild scratching can lessen the effects. Over an extended period of time, this lack of pigmentation should resolve with only mild, if any, residual effects.

Another type of skin injury that can result from acne is very troublesome the development of large unsightly scars called keloids. Some people produce excess collagen at the site of any minor skin trauma. While the cause is still unknown, this phenomenon has often been observed following even minor procedures like ear piercing or tattooing. African Americans and other darkly pigmented people are most likely to exhibit this response.

Keloids commonly form over the front of the chest. Minor chest acne can produce itchy, pink, fibrous growths which continue to grow. A number of treatments, from simple observation to cortisone injection directly into the scar, is practiced for this hyperactive wound healing response. Triamcinolone, a type of steroid, is often directly injected into the keloids. In some more recently developed treatments, silicone gel is applied to the scars. This method is believed to be most effective if keloid formation has just started. Some more severe cases may call for surgery or laser removal. Still in experimental stages is a new treatment involving injection with interferon.

Here are two general types of acne scars, depending on how the skin tissue responds to acne inflammation:

The scars caused by enlarged or overgrown tissue are called keloids or hypertrophic scars. Both types of scars are caused by excessive amounts of collagen. Injured skin cells can respond by over producing collagen, which becomes piled up in fibrous masses. The scar is characteristically firm, smooth and irregularly shaped. Hypertrophic and keloid scars last for years but may diminish in size over time.

Acne scars associated with loss of tissue similar to scars that result from chicken pox are more common than keloids and hypertrophic scars.

Ice-pick scars usually occur on the cheek. They are usually small, with a somewhat jagged edge and steep sides like wounds from an ice pick. Ice-pick scars may be shallow or deep, may be hard or soft to the touch and too deep to correct with skin resurfacing treatments such as dermabrasion or laser resurfacing. With this type of scar, the dermatologist will do a “punch excision” and cut out the core of scar tissue with a biopsy punch needle and carefully stitch up the hole. Some physicians may do a punch graft at the same time the scar tissue is removed with the same biopsy punch needle. Then, a small graft of normal skin usually taken from behind the ear is transferred to fill in the cavity and then taped in place.

Boxcar scars are round to oval depressions that have sharp vertical edges. Unlike ice-pick scars, they do not taper to a point at the base. For this type of scar, physicians use a technique called “punch elevation,” sometimes called a “punch float.” The scar tissue is elevated from the surrounding fat to level it with the surrounding tissue and taped or stitched in place.

Rolling scars occur when otherwise normal-appearing skin becomes “tethered” to the subcutaneous tissue below. This process gives the skin a rolling or undulating appearance. Conventional skin resurfacing techniques do not work on rolling scars. The fibrous bands under the skin must be broken up surgically.

Atrophic macules are usually fairly small when they occur on the face, but may be larger on the body. They are soft, often with a slightly wrinkled base, and may be bluish in appearance due to blood vessels lying just under the scar. Over time, these scars change from bluish to ivory white in color in white-skinned people and become much less obvious.

Follicular macular atrophy is more likely to occur on the chest or back of a person with acne. These are small, white, soft lesions, often barely raised above the surface of the skin they almost look like whiteheads that never fully developed. The lesions may persist for months to years.

Acne scarring can be a minor annoyance or a lifelong concern. Prevention is best. If acne does leave its marks, however, there are many options available.

Ice-pick scars are one of the worst kind of acne scarring there is. It usually occurs on the face most likely on the cheek. Ice pick scars are usually small, with a somewhat sharped edge and steep sides on close examination they look like wounds from an ice pick.

Ice-pick scars come in many degrees from being shallow to deep, they can also be hard or soft. Soft scars can be improved by stretching the skin; hard ice-pick scars cannot be stretched out.

The following are some of the treatment options available for people suffering from Ice Prick scars.

Collagen is a substance of the body that is injected to fill out the holes that are created by the scars. Although Collagen treatment is effective in many aspects it’s not as effective in the case of acne scars. Collagen injections are effective for 3-6 months so it can be termed as a short-term solution that has to be used on a consistent basis.

Dermabrasion is one of the most effective treatments for acne scars. It is done by using a high-speed brush to remove surface skin and alter the contour of scars. The scars may get removed altogether if they are superficial while deep scars may be just partially fixed.

Lasers treatment in the case of ice-pick scars has proved to be successful for many people. Laser treatment is done through various wavelength and intensity to re-contour scar tissue and reduces the redness of the skin. This also proves effective around the healed acne lesions. The carbon dioxide laser is so strong that it removes Tissues because of its powerful instruments.

Apart from this treatment, there are also other options available:

An estimated ten million Americans become scarred by acne each year. Who will develop acne scars and how severe will scarring be? Even looking into a crystal ball won’t give you the answer. It has already been established that heredity plays a strong role in the severity of acne, and the scar formation that results.

It’s almost inescapable. 95% of acne patients will develop some degree of scarring. Establishing the appropriate treatments early in the process that works for the severity of the outbreak can improve the odds that scar formation will be mild. Delaying acne therapy by three or more years is likely to increase one’s risk of more significant acne scarring.

For most people, acne scarring is a minor annoyance. For others, acne scarring can cause devastating long-term emotional suffering. Depression, withdrawal, and lack of self-esteem can plague acne-ridden teens. In fact, acne scarring has been cited as a risk factor for male teenage suicide.

People suffering from acne now have choices newer acne therapies make it needless for anyone to suffer from long outbreaks or go on to form scars. Unnecessary disfigurement can be prevented by early medical intervention. No need to drop everything, and rush to schedule an appointment with a dermatologist, if a single blemish should raise its ugly head. However, any acne that doesn’t respond to commonly used over-the-counter therapies should be evaluated by a specialist.

Some acne patients go for their initial 6 to 8 week follow up with the dermatologist concerned about their “new acne scars.” Many of them really have no scars at all. What they’re really noticing is a color change. Hyperpigmentation following acne inflammation is not an acne scar. The skin’s typical inflammatory process leaves this normal remnant.

People with paler skin tones will notice color changes that are primarily pink, red or purple. Darker-skinned acne victims may notice brown or black spots where their acne used to be. This hyperpigmentation can go away on its own. Unfortunately, the darker the pigmentation, the longer it may take to resolve.

Intervention may be necessary to hasten the process. Acne scars are not all alike. The most common outcome is tissue loss, as collagen is destroyed. Skin lying over the collapsed area has no support and a soft pockmark or jagged ice pick scar is formed. This is more typical on the face and is seen in both men and women. Less frequently, and usually in cases of severe acne, excessive scar tissue, called a keloid, is formed from the over-production of collagen. This is more commonly seen on the male torso.

Aging can affect how visible acne scars can be. After the age of 40, we lose 1% of our skin’s collagen each year. With this additional loss of collagen combined with reduced skin tone, scars can become far more noticeable. Ironically, you can actually end up “outgrowing” these acne scars as part of the aging process. Small comfort! 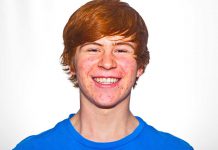